A home without a cat--and a well-fed, well-petted and properly revered cat--may be a perfect home, perhaps, but how can it prove title?
- Pudd'nhead Wilson

You may say a cat uses good grammar. Well, a cat does -- but you let a cat get excited once; you let a cat get to pulling fur with another cat on a shed, nights, and you'll hear grammar that will give you the lockjaw. Ignorant people think it's the noise which fighting cats make that is so aggravating, but it ain't so; it's the sickening grammar they use.
- A Tramp Abroad

One of the most striking differences between a cat and a lie is that a cat has only nine lives.
- Pudd'nhead Wilson

A cat is more intelligent than people believe, and can be taught any crime.
- Notebook, 1895

Of all God's creatures there is only one that cannot be made the slave of the lash. That one is the cat. If man could be crossed with the cat it would improve man, but it would deteriorate the cat.
- Notebook, 1894

By what right has the dog come to be regarded as a "noble" animal? The more brutal and cruel and unjust you are to him the more your fawning and adoring slave he becomes; whereas, if you shamefully misuse a cat once she will always maintain a dignified reserve toward you afterward--you will never get her full confidence again.
- Mark Twain, a Biography

I urged that kings were dangerous. He said, then have cats. He was sure that a royal family of cats would answer every purpose. They would be as useful as any other royal family, they would know as much, they would have the same virtues and the same treacheries, the same disposition to get up shindies with other royal cats, they would be laughably vain and absurd and never know it, they would be wholly inexpensive, finally, they would have as sound a divine right as any other royal house...The worship of royalty being founded in unreason, these graceful and harmless cats would easily become as sacred as any other royalties, and indeed more so, because it would presently be noticed that they hanged nobody, beheaded nobody, imprisoned nobody, inflicted no cruelties or injustices of any sort, and so must be worthy of a deeper love and reverence than the customary human king, and would certainly get it.
- A Connecticut Yankee in King Arthur's Court

I simply can't resist a cat, particularly a purring one. They are the cleanest, cunningest, and most intelligent things I know, outside of the girl you love, of course.
- quoted in Abroad with Mark Twain and Eugene Field, Fisher 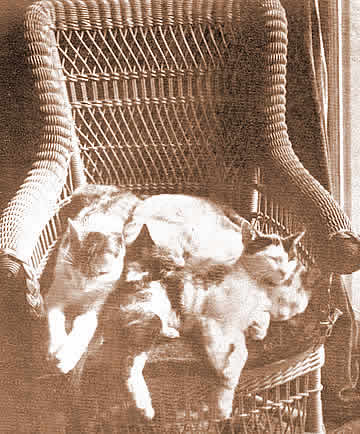 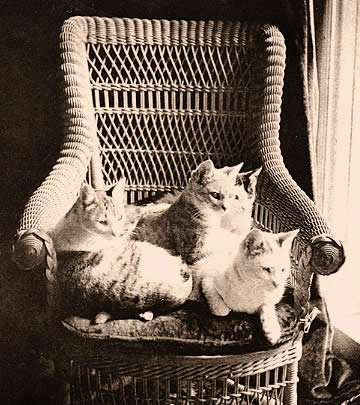 "He would call (the cats) to "come up" on the
chair, and they would all jump up on the seat.
He would tell them to "go to sleep," and instantly
the group were all fast asleep, remaining so until
he called "Wide awake!" when in a twinkling up
would go their ears and wide open their eyes."
- Anonymous article entitled "The Funniest Writer
on Earth. Some Anecdotes about Mark Twain," The Rambler, Dec. 24, 1898. 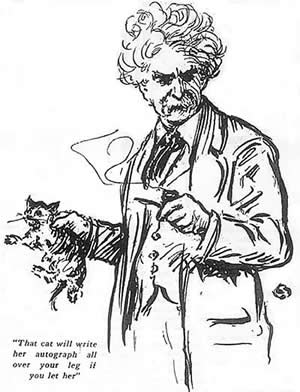 "That cat will write her autograph all over your leg if you let her."
- from memoirs of Clemens' secretary Mary Howden which were published in New York Herald, December 13, 1925 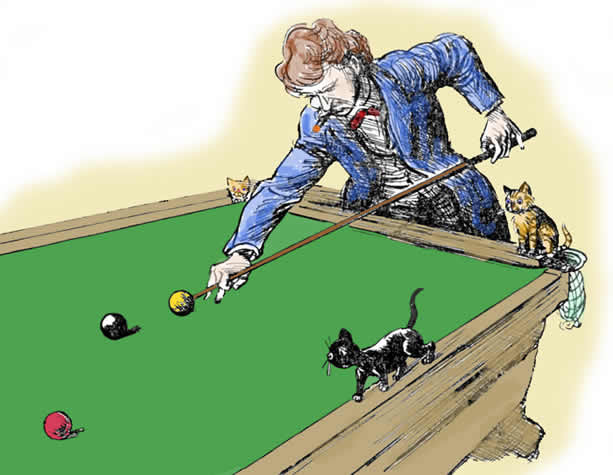 One of them likes to be crammed into a corner-pocket of the billiard table--which he fits as snugly as does a finger in a glove and then he watches the game (and obstructs it) by the hour, and spoils many a shot by putting out his paw and changing the direction of a passing ball.
- Letter to Mable Larkin Patterson, October 2, 1908